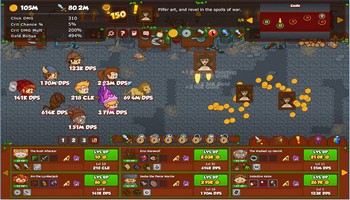 Crusaders of the Lost Idols is a free-to-play single player clicker game that puts you in charge of a band of fighters set in a fantasy world. Your mission is to form a mighty group of adventurers to take on waves of enemies as they rid the world of evil-doers, bad guys, terrible T-Rex, irritable escargot and Panda Claw. Yes, that’s right, a giant panda with lobster claws. Crusaders of the Lost Idols is the only idle game to include a strategic formation feature, as you must now learn to master the art of organising your motley band into the most powerful formation possible. The position of each fighter next to his or her companions will have a significant effect on their attack strength. Combined with equipped buffs and upgrades, this unique feature adds layers of deep complexity to the idle genre.

Unique Formation Strategy: The only Idle Game to feature a formation system. Unique character abilities, buffs and gear challenge the player to find the best formation every campaign.

Dozens of Unusual Characters: Colourful characters, some based in the broader world of video games. A host of in-jokes abound for the attentive gamer.

More than 280 types of Gear, Buffs and Upgrades: A cornucopia of deep content awaits the player. Unique upgrades by character coupled with special gear and buffs demands players learn their strengths and weaknesses to succeed.

Daily Quests: Every day players are challenged with mini objectives that will reward them with precious red rubies once completed. Quest objectives include everything from using certain abilities a set amount of times through to killing a predetermined number of monsters.

Crusaders of the Lost Idols Screenshots 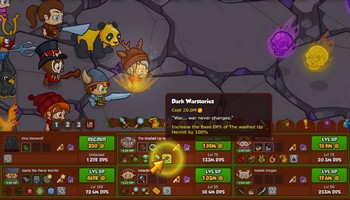 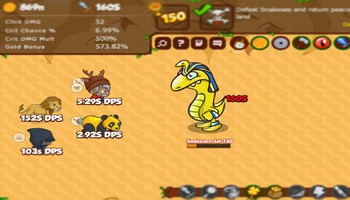 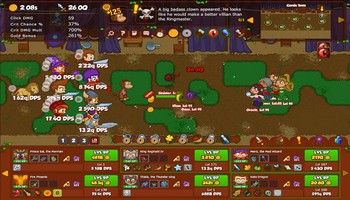 Crusaders of the Lost Idols Videos

The Hidden Temple Event update, 2021 Edition!...
In the temple, the hidden temple, the axolotl sleeps tonight.Yaretzi has woken and is here to join your band of Crusaders! [...]
Crusaders of the Lost Idols Update: Season 4, The ...
Season 4 debuts the Abyssal Chasm theme and some new rewards from the reward tracks! Mind the lava and take a peak at these scorching u [...]
Crusaders of the Lost Idols Event Update: Nate...
The Crusaders have once again been pulled into a parallel universe overrun with hordes of demonic candy. It's 'eat or be eaten,' it's time for Nate's Candy Conundrum 6! This year, we have our own Confectionery Creature on our side: Marzimallow, the Delicious!This y [...]
Crusaders of the Lost Idols Update: More Tier 4 11...
Ready for some new challenges that will test your formation building skills all over again? Craving some more power? Then read the [...]