Janosik is a free retro action-platformer game with metroidvania elements: exploration, upgrades and big interconnected level. It’s fast-paced, challenging, and full of secrets; Janosik’s companions are in trouble. They were captured by soldiers. Janosik is on the mission to take back […]

Cookies Must Die is a free-to-play fast-paced, platform-based action and shooter game for mobile devices, which offers neat and polished gameplay in a relatively unobtrusive freemium model. Meet Jack. Jack is a super-secret agent with special powers implanted in his body […]

Overclocked is a free action-platformer game by indie studio Magnesium Ninja, that mixes combat and fluid movement with a classic retro twist. Take on the role of Amber, a glass-cannon vigilante who is fighting to protect her home from an enigmatic […]

Mandagon is a free single-player adventure platform game with detailed pixel art and set in an immersive atmosphere very loosely inspired by Tibetan philosophy. Namely life and death. . . musing on what it means to make a sacrifice. Mandagon is […]

Spelunky (classic) is a free, open source, single-player and coop cave exploration and treasure-hunting game for PC (Windows) inspired by classic platform games and roguelikes, where the goal is to grab as much treasure from the cave as possible. Every time […] 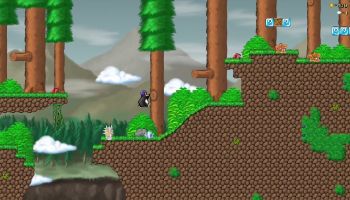 SuperTux is a free, open source single-player platform game for PC (Windows, Mac and Linux). It is inspired by and plays pretty much like Super Mario games, but adds some unique abilities. Run, jump, backflip and swim through multiple worlds, fighting […]

Bio Menace is a (now free) sci-fi platform shooter by Apogee Software (3D Realms) that used to be very popular when it was first released in 1993! Join top CIA tough guy, Snake Logan as he battles for his life against […]