Lime Odyssey was a free-to-play 3D fantasy MMORPG for PC (not to be confused with mobile relaunch Lime Odyssey M announced in 2021 as a blockchain and NFT supported game) boasting a boundless expansive world, unique player races, dual class system, realistic open-world gameplay, and much more. Lime Odyssey was created by celebrated developers and a world-renowned music composer. The vast continent of Orta is home to a diverse collection of races and tribes. Choose from a variety of customization options to design your ideal character – create a bold young human thief, a diminutive Muris mage, or a battle-hardened Turga warrior – the choice is yours! You also set out with a profession in addition to your class that grants you the ability to gather materials and create items. Each race begins their quest in a unique starting location.

Battle across diverse terrain, from vast grasslands to underwater dungeons. Build your own home or shop, and create a village with your friends! Venture through large and dangerous instanced and open world dungeons.

– Three Player Races: The vast continent of Orta is home to a diverse collection of races and tribes. Choose from a variety of customization options to design your ideal character ‐ create a bold young human, a diminutive Muris, or a battle‐hardened Turga. Each race begins their quest in a unique starting location.
– Four Classes: Define your role in the mysterious world of Orta by choosing from one of four iconic classes. Join the ranks of the adventurous thieves, meet your foes head on as a warrior, become a healing cleric, or opt for power with the mage.
– Diverse Professions: There’s more to life than questing across the countryside and slaying nightmarish monsters. Contribute to coinpurse and community by picking up a profession and perfecting your trade. Outfit your friends as a Tailor, concoct delicious recipes as master Chef, or become the local Blacksmith and forge powerful tools and weapons.
– Critically Acclaimed: Popularly hailed as the “spiritual successor to Ragnarok Online,” Lime Odyssey is developed by a celebrated team of industry veterans and features a soundtrack scored by the composer behind such classics as Chrono Trigger and Xenosaga. LO promises to be one of the most anticipated free‐to‐play MMO titles of the year.

In the dim and distant past, somewhere between the veils of legend and history, all races shared a vast continent. Human, Turga, and Muris lived side-by-side in a peaceful kingdom. Myths say the goddess Nysis had made it idyllic and prosperous, and given its people a magical fruit. Called Lime, this fruit was said to be distilled from the rays of the goddess’s glory and contain incredible power.

The temptation of such power proved too much for some. A tyrant began hoarding the Lime for himself, slaughtering two thousand innocents to gather it all. Across the land, statues of the goddess Nysis wept crimson tears for her murdered children. The suffering continued to grow, until finally the tyrant vanished with the Lime, certain that all of the blessed fruit was in his possession. Without Lime in the land of Orta, peace and prosperity gave way to fear. Survival became a struggle. The golden age had ended and was gradually forgotten.

Centuries passed, and the land seethed with violence. The Orta continent crumbled into four pieces. They drifted apart on frigid seas, farther and farther, as if they had never been whole. Time passed once again. Now, pillars of blue light glimmer skyward, one from each quarter of Orta. Ancient winds stir, whispering that Lime is searching for a new master. The goddess’s fruit has returned! Will the goddess’s blessing follow? Legend and memory flood back on a wave of speculation. Excitement builds among all races. Burgeoned by this swelling tide, adventurers set out, searching for hope…for a new future…for Lime. 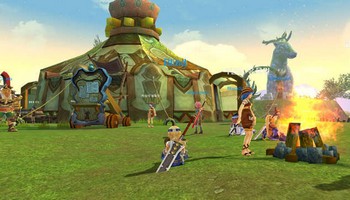 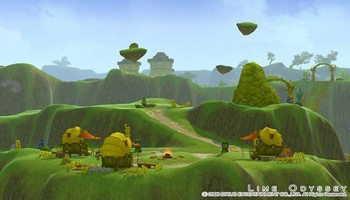 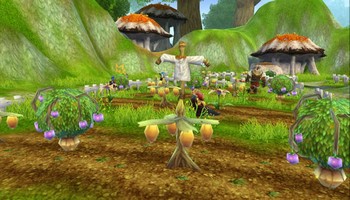