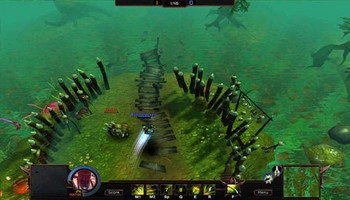 Bloodline Champions is a free-to-play online PvP arena game (MOBA) where players engage in short, intense battles of up to ten players divided into two teams, 5 vs 5. Each player must take control over one of several different bloodlines, each with their own unique weapons and abilities and take on team battles to rank up further. Easy to learn, challenging to master. The objective is different depending on the game mode, ranging from team deathmatch and capture-the-flag to map point control.

Experience intense, adrenaline-fueled multiplayer battles with thousands of other players. Short matches ensure you will never get stuck in a long drawn out game – great for quick bursts of fun!
Grinding, bases, levels and gold you’ll find none of that in a match! Just pure, exciting, all-out player vs. player battles where you and your skill is all that matters!
Choose your character from a total of twenty two (22) Bloodlines, each with their own abilities and specialities. From the fire-wielding Igniter to the elusive Ranid Assassin, each offers a unique experience!
Easy to learn, difficult to master. Direct controls, cursor-basedaiming, focused characters and an easy-to-learn interface allows you to enjoy -Bloodline Champions just minutes into your first battle!
Thanks to a robust matchmaking system you will be off onto the fields of battle immediately after joining. Play up to five versus five battles, either with strangers automatically matched to your level or with a team of your best friends!
Keep an eye on your progression using an in-depth stat tracking system that allows you to review your own as well as other players’ effectiveness with different tactics, abilities and bloodlines.
Short and intense battles focus on player skill, and an elaborate stat-tracking system makes Bloodline Champions perfect for competitive gaming.
Vibrant graphics, a unique art style and a superb sound design brings the world of Bloodline Champions to life as you keep yourself busy with dealing out death and destruction.

There are four categories of bloodlines (character archetypes): melee attack, ranged attack, healer, and tank. There are currently 26 bloodlines, with six or seven in each category. Stunlock Studios have announced that they are working on new bloodlines. Each bloodline has seven abilities, two of which have an EX version, an enhanced version of the ability. Each has its own cooldown, as well as triggering short global cooldowns. The seventh ability is an “ultimate” ability that may only be used after gaining sufficient energy through executing other abilities successfully, such as healing allies, damaging enemies, and otherwise helping your team.
Bloodlines also have HP (Health Points) – when the champion runs out of HP, the champion dies, removing it from combat until the end of the round. Each champion also has two items that grant additional abilities. The Bloodline Medallion allows a champion to recover an increasing amount of HP over a period of time and Resurrect revives nearby fallen teammates. Both items require a significant amount of uninterrupted time to prepare, which makes them impractical in immediate combat. In Conquest and Capture The Artifact modes resurrection skill has been replaced with warp skill that allows you to warp a short distance every 20 seconds.
The controls in Bloodline Champions are similar to a first-person shooter, as the bloodline’s movement is controlled using the W, A, S, and D keys. The primary two abilities are mapped to the left and right mouse buttons, and the rest of the abilities are used with the Q, E, R, F, and space keys. Almost all the abilities are aimed, where the direction of the ability is determined by the position of the cursor on the screen relative to the champion’s position. There are two different camera modes; Free Look and Static. The static camera stays over the characters head at all times regardless of the location of the players cursor. The Free Look camera allows the player to control their camera with the cursor. A few defensive abilities are directed by hovering the cursor on the desired recipient, and some abilities target a specific location on the playing field.
Bloodline Champions also features fog of war which represents the areas of the map which cannot be seen due to visual obstruction or distance. There are obstacles on the map which create fog of war and inhibit movement. Champions have their own collision, which can be used to inhibit movement and protect allies (for example a tank bloodline will have a larger collision size, making it easier to defend teammates by blocking fire, but also being more susceptible to focus fire). 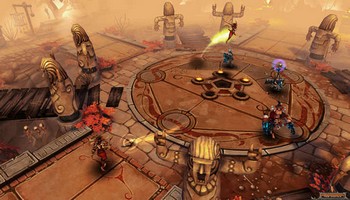 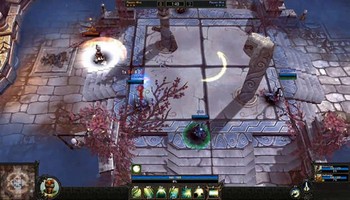 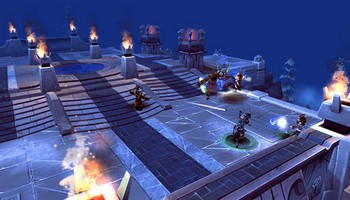