BrainBread 2 is a free-to-play zombie multiplayer fps game mixed with RPG / Arcade elements. the game is very action-packed and generally fast-paced. BrainBread 2 features 5 game modes (Story, Objective, Arena, Elimination, Deathmatch), an extensive array of weapons and character customization, the possibility to play as a zombie, to fight against other players in PVP or against AI Soldiers, Tanks and Bandits/Mercenaries in Coop vs Environment.

– 5 Unique gamemodes.
– Over 20 unique weapons, including akimbo weapons!
– Extreme amounts of gore & gibbing, this is your lovely grindhouse-gore movie!
– Over 100 unique skill combinations.
– A global profile system/leveling system.
– Play as a zombie, evolve as a zombie using your special zombie skill tree to your advantage!
– Modding friendly, customize your own soundsets for any of the npcs, make your own player survivor models, make custom maps, share your creations via Workshop!
– Character customization.
– AI Soldiers, Tanks and Bandits/Mercenaries.
– A powerful quest, objective & inventory system.
– Playable on PC, Mac OSX, and Linux with multiplayer cross-compatibility.

CyberCon, the notorious global corporation, aspired to deliver to the world something that would change the fate of humanity. What the world wasn’t ready for however… Was CyberCon’s true intentions. Their schemes had been controversial to most before, but their newest idea seemed almost too perfect. A much sinister secret was about to be exposed. CyberCon’s project involved the development of neuro-hub chips. They succeeded and became a phenomenon, later becoming a mandatory law to have them implanted at birth using state of the art surgery and cutting edge technology.
CyberCon were granted this permission from the government. The controversy was covered up and very little was known how it was done.
The technology was seen by many around the world as a major breakthrough that could cure blindness, deafness, disease, and a huge boost in performance for modern day life.
It was further aiding as a gateway to easier communication and enhanced capabilities. This was the next milestone in human history.
However, good things must always come to an end.
And CyberCon’s true colors are yet to be revealed.

Story: Focuses on story based gameplay, progress by doing specific quests or side-quests to increase your chance of survival!
Objective: Focuses on small & simple objectives, this is a casual/chill gamemode based on the original BrainBread, if you want a pure BrainBread experience you can enable a server command to force it to vanilla BrainBread mode. In this mode you can also play as a zombie and as a human you can get infected. The zombie’s objective is to prevent the humans from progressing, when you get a certain amount of kills you will be able to respawn as a human again, or if you die too many times. All of this can be regulated by the server owner.
Arena: This is a wave based gamemode, similar to ‘Survival’. You have limited respawns and when you die you’ll respawn after X amount of seconds. Everyone respawns at the same time, certain maps may allow certain amount of retries for a wave, if you fail too many times you have to do everything over again. This mode is very action-packed, you better be flexible.
Elimination: A Humans VS Zombies gamemode, first team to reach the fraglimit wins! In this mode you respawn individually, however if everyone on your team is dead your team will be ‘Exterminated’, which means the round is over. The opposite team gains a certain amount of points by exterminating the other team, this is an effective way to gain points but it is hard to achieve if there’s many players. In this mode you’ll also trigger a team perk if your team gets a certain amount of kills, your team will be blessed with some helpful skill for a certain amount of seconds.
Deathmatch: A PvP gamemode, solely for humans. Featuring classic old-school powerups, increased speed and flexibility! As well as an announcer which will try to salute you or make fun of you if you fail too much! 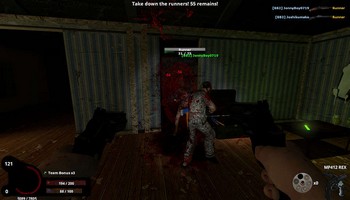 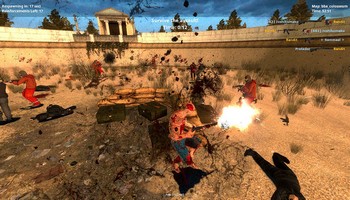 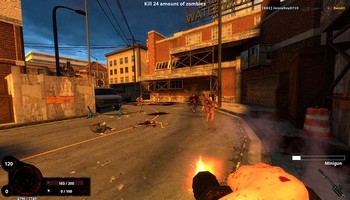