Catan Universe is a free-to-play Turn-based Strategy game based on popular German board game The Settlers of Catan. After a long, hardship filled journey you have reached the coast of an unknown island. However, other explorers have also landed on Catan: The race to settle the island has begun. Build roads and towns, trade skilfully and become ruler over Catan. Set out on a journey into the Catan universe, and compete in exciting duels against players from all over the world. The board game classic and the Catan card game, with totally new graphics, bring an authentic card table feel to your screen. In future you will be able to play with just one Catan account on PC, Mac, iOS and Android devices, and compete against the entire worldwide Catan community on all supported platforms.

– Trade, build, settle, become ruler over Catan
– Faithful to the original version of the board game “Catan”, as well as the card game “Catan – The Duel”
– Create your own Avatar
– Chat with other players
– Form yourselves into guilds
– Earn numerous achievements and unlocks 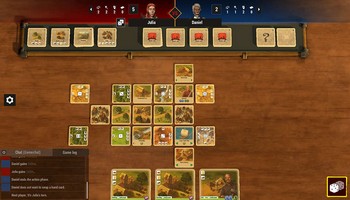 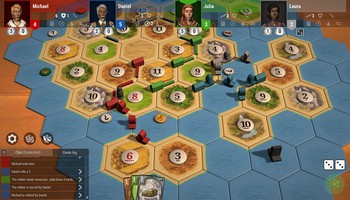 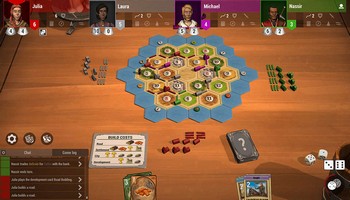 75
/100
“
True and realistic video game adaptation of The Settlers of Catan board game. Enjoy the look & feel of the classic cardboard texture with a free, dematerialized version made in Germany that will never wear out.
”

Catan Universe boasts neat and polished graphics in cardboard-textured artwork that beautifully reproduces the look and feel of the classic board game. The game is well optimized and will run on most low-end laptops.

Enjoy turn-based tactical gameplay at its best. Each round brings you one type of resource or more based on the number drawn and the settlements you may have on the corresponding tile, and each round lets you trade with other players for resources you may not have, but need in order to expand and upgrade your settlements for the win. A great mix of strategy and luck involved.

Catan Universe is just as fun to play and replay as is its cardboard counterpart. In its current freemium version, the replay value of Catan Universe may appear limited at first as some features can only be unlocked temporarily by leveling up, but this can actually make playing more rewarding.

The F2P version grants you access to the basic board game in multiplayer (free-matches versus 2 other human players), as well as the introductory game of Catan – The Duel. It also grants you a bonus of 100 Gold and 2 Scrolls up for account creation and login which can be used to unlock expansions for a limited time and to gain full access to Auto-Match, Single-player and Custom-Matches, with more scrolls unlockable by leveling up.