Core Blaze is a brand new concept in MMO gaming. Experience the “pure basics” of gaming that you have missed in recent years. Core Blaze goes beyond regurgitated concepts, characters and gameplay and will reignite your love and passion for online gaming! Rather than repeatedly “clicking” monsters to death, earning experience points and hanging around hoping some decent loot appears, when you journey through Core Blaze, you won’t go through the same, rigid, pre-designed route over and over again – You have the freedom for endless exploration and living the game your way! Compared to traditional MMORPG games, Core Blaze feels more like an action game – in addition to the main weapon system and specific solutions, the game also features a novel concept – immediate interaction – the immediate interaction system will randomly generate complicated and unpredictable missions and bosses that players need to take different approaches to defeat. So, players can enjoy uninterrupted surprises and thrilling anticipation in Core.

–Secure Four Key Weapons and Survive Battles: Core Blaze features a high degree of freedom in weapon selection, and players can choose different weapons at will right before assaults on a battlefield. Players can, for example, adopt an offensive strategy to equip the Sword & Shield today, switch to the Great Sword tomorrow and change to the Long Bow in group missions.
Along with equipment and combat skills, the attributes that players acquire after they gain more experience will become core elements affecting combat effectiveness on the battlefield. Immediate actions that players take in a battle, tempos of attacks, angles of attacks and even supportive actions to go with your teammates’ moves are all keys to winning in the adventure.
–Your Parnters May be your only Hope: In sophisticated game scenes, crises and mysteries are hidden inside some seemingly insignificant places, and players will need to adopt different strategies to work around them. For instance, when a cliff is right in front of you, you can work with your teammates to cross it; or, to cross an impassable river, you and your partners can cut down trees along the riverbank to build a quick bridge! The immediate interaction system not only tests the ability of players to inspect the surrounding environment, but also stimulates the creativity of players.
–Unlimited Mysteries and Trials: In Core Blaze, exploration is another unique element. Missions are designed to include main plots and sub plots, and the scenes will change based on players’ game progress, weather, and time… and so on. So, even in the same scene, the environment and assigned routes will not be identical, and the AI, skills and strengths of monsters players encounter will be different. So, players are motivated to explore further in Core Blaze.

There was a time when the land didn’t look like this. This was the time of the gods. The gods made a terrible sacrifice to expel powerful and ancient demons. Because of this, their deeply beloved land was burned with curses forcing the gods to leave. Only the gods’ people can now live here.
As the players experience the story, they will step into different lands, each having its own unique style. In the peculiar topographies formed in ancient times, there is a heritage from an ancient civilization that was left behind for thousands of years. Epic adventures wait for you and your friends when you walk across snow covered mountains, cross river valleys, explore abysses, go into the darkness of caves and wander through ancient temples! 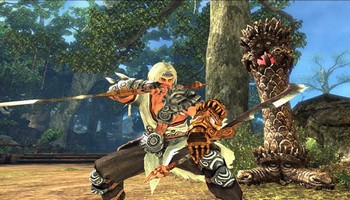 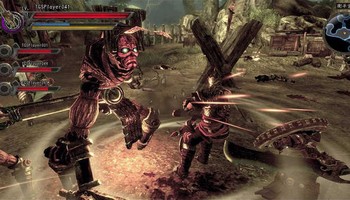 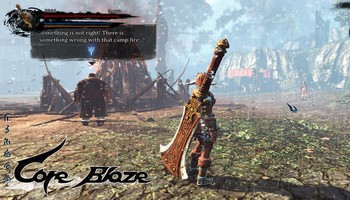