DC Universe Online is a free-to-play MMORPG based upon the fictional universe of DC Comics. The game delivers unparalleled physics-powered combat set in the DC Universe™. This genre-defining game puts the power of the DC Super Heroes and villains into the palm of your hands. DCUO is an action-focused hero and villain game in a fully realized 3D DC Universe created in the artistic vision of legendary comic book artist Jim Lee and DC Comic’s WildStorm Productions. Customization allows players to create their own custom hero or villain.
Players will embark on story-driven adventures penned by Geoff Johns and other famous DC writers while the game world’s depth will span the entire DC Universe

Experience the power of visceral combat where you control every blow your character strikes, delivering a level of action that is unparalleled in the MMO segment. Choose your side -superhero or villain- as you battle to save or conquer the universe.
Fight alongside or against your favorite DC heroes and villains including Batman, The Joker, Superman, Wonder Woman and others? The next legend is YOU!
Experience the intensity of a world created in the artistic vision of legendary comic book artist Jim Lee.
Take advantage of the state-of-the-art physics engine and use objects in the world around you as weapons, including even your enemies!
Players will create their own custom DC-style hero or villain, each with a unique look and combination of superpowers.
Embark on heroic or villainous story-driven adventures penned by famous DC writers including Geoff Johns and Marv Wolfman.
Gameplay is optimized for both the PS3 computer entertainment system and PC.
Explore the DC Universe; walk the darkened streets of Gotham City, investigate the mysteries of the futuristic cityscape of Metropolis and travel to legendary locations including Arkham Asylum and the Justice League of America Watchtower.

Players will choose a mentor for their character whether it be a hero (like Superman, Batman, or Wonder Woman) or a villain (like Lex Luthor, Joker, or Circe). Their starting location, principal quest rewards and mob loot will be influenced by that decision. The starting zones are either Metropolis or Gotham City, for both heroes and villains. Heroes can also go to the Justice League Watchtower while villains can enter the Secret Society of Super Villains headquarters at the Hall of Doom. Other safe-houses in the Gotham and Metropolis zones can be reached by teleporters from the two faction headquarters or from the two cities. For the heroes, it’s various police stations. For the villains, it’s various nightclubs owned by the villains.
Each character is given a communicator appropriate to their faction, via which they receive urgent communications from their mentor and his/her colleagues and subordinates; heroes will frequently receive status updates from Oracle, while villains will receive data from Calculator. In addition to assignments from their mentor, player characters may also receive requests for help from other mentors of the same faction. Player characters may also accept missions from non-player characters (NPCs) in the street, usually minor characters from their faction. There are also opportunities for quick street encounters appropriate to the character’s faction: for example, a hero character may encounter a thug robbing an armored truck, trying to break into an office building, or in the process of mugging a citizen; while a villain character may be presented with opportunities to assist NPC thugs with an armored truck robbery, or assault a citizen using an ATM. All NPC interactions are fully animated and voice-acted. Player characters will earn threat ratings that will cause NPC heroes and villains to interact accordingly with the character.
The shared worldspace offers primarily solo and team player versus environment (PvE) gaming opportunities in the form of open air missions and instances, although player versus player (PvP) combat is also possible in this worldspace. Other PvP (and to a smaller extent, PvE) gaming is available in various types of queued instanced encounters: “Legends”, small scale PvP combats in which players take on the identities of iconic characters (continued success in Legends combat unlocks additional iconic characters); “Arena”, small scale PvP combat in which players fight as their own characters; “Alerts”, cooperative team missions; and “Raids”, Cooperative PvE missions that are larger than Alerts. Success in PvE missions is rewarded with in-game money, costume pieces, equipment and consumables, while PVP combat is rewarded with unlocks of special equipment sets. 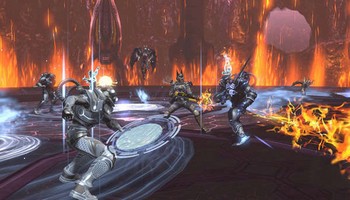 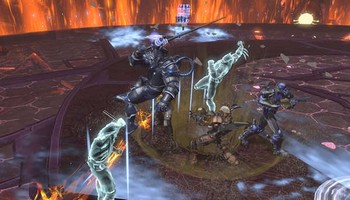 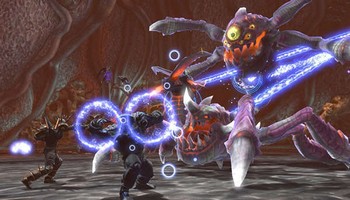