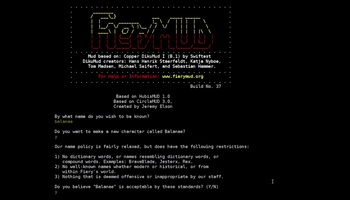 FieryMUD is a free*, dark fantasy MUD (Multi-user dungeon) or text-based multiplayer RPG that has been up and running since 1991. The game has 99 mortal levels of progression, 12 individual races, 4 main classes with approx. 20 different sub-classes, each having an abundance of their own unique skills and/or spells. The original vision of FieryMUD by Chris Camacho was to create a challanging MUD for advanced players. This new reborne Fiery is a hope to bring back the goals of the past by inflicting certain death on unsuspecting players. FieryMUD will continue to grow and change through the coming years and those players who seek challenge and possess imagination will come in search of what the 3D world fails to offer them.

The players make FieryMUD what is has become today, however it was originally concept initiated, hosted, coded and implemented by Chris Camacho as this C coding project utilizing the Copper Gamma base code that just went awry. He had no idea some psychos would actually like it and play there all the time. As a result of his efforts in the face of an ‘all frills or bust’ mudding community he quietly kept running one of the oldest Diku muds on the internet. It has only taken massive hardware failure to allow Scott Davis a crack at vaguely more modern code to allow FieryMUD interim possession of a different and challanging player interface.

Amid the world of Ethilien, on the eastern continent of Caelia, lies the classical power struggle of good and evil: righteous vs demonic. Having long been the testing ground of many a god, Ethilien’s history stretches back many millenia, to when there were but seven. Of these primal gods, many of whose names are now forgotten, the All-Father was Metamorpho. He created Ethilien and populated it with her inhabitants.

Some thousand years ago, chaos erupted as the the once-proud city of Templace was plunged into war. Now only rubble remains of what once was. Legend has it that one of the gods tore open the fabric of the planes and allowed demons to invade, and that, moreoever, he killed the mortal priest of his brother-god. Infuriated, Metamorpho stepped in and set matters aright—the infamous god was destroyed and the priest’s body reclaimed. The Kaazian priest’s brother, a sorceror, and his sister, a warrior, scattered to their own destinations after the war… fading from record. Templace was destroyed, and the anti-paladins created in the battle retreated to other cities, most notably Anduin. However… (read more).

*FieryMUD is completely free. All game content and progression is free. Nothing can be bought to give anyone an advantage. 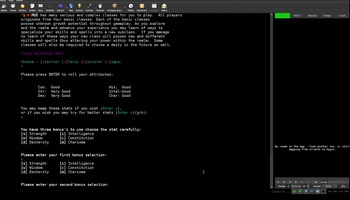 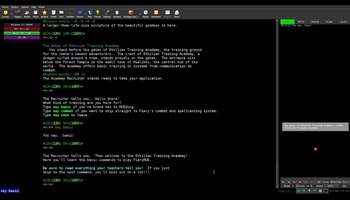 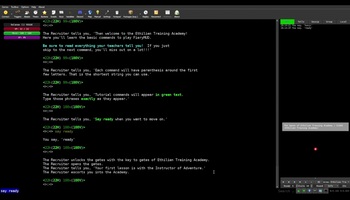