Gems of War is a free-to-play Puzzle/RPG/Strategy mash-up game from the creators of Puzzle Quest. Battle against epic bosses or other players. In Gems of War, you battle your foes not just with swords and sorcery, but with a puzzle board! Match gems to power your spells, and match skulls to smite your enemies! Then take the spoils of war, and forge a mighty empire. It’s highly addictive, easy to learn, and filled with crazy combos and tons of depth.
Each Kingdom has quirky new characters to meet, and plenty of quests and battles to keep you occupied. Even better, there’s 15 Kingdoms full of fun (with more coming soon).
Are you looking for a greater challenge? Maybe Player vs. Player (PvP) combat is your thing. Fight other players in each kingdom, become the champion, then defend your title against the ravening hordes. You can even join a guild and fight alongside your friends!

Collect and level-up: over 100 different troops and their special spells
Discover over 150 Quests: each with a distinctive story
Collect all 65 Weapons: and their unique spells
Ranked: Rise on the global rankings in asynchronous PvP
Cooperative Guilds: Team up with others in guilds
Cross-Platform: Link your account so you can play across device platforms

Gems of War is based on a time-restricted free-to-play model, allowing you 1-2 hours of free gaming on a daily basis. The game also contains much incentive to pay as a result of slow progression. The game remains playable for free at that pace and you may spend some money during sales to speed up your progress and get a good armor. A relatively pay-to-win but highly free-to-have fun game. 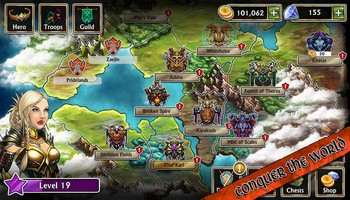 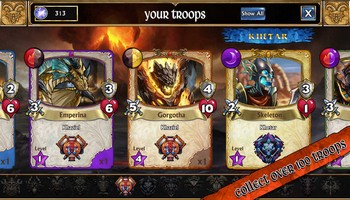 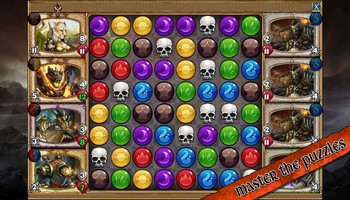 News from Gems of War

5.4 Update...
5.4 UPDATEWe have made a major technical upgrade to Gems of War so we will be able to look at supporting ne [...]
5.3.5 Update...
This update will be available on Steam, iOS, Android, Xbox, PlayStation and Switch.We have removed the hol [...]
A NEW MYTHIC APPROACHES – THE SCOURGE OF HONOR...
New Mythic Troop: The Scourge of HonorThe Scourge of Honor will be the only Mythic Troop available in Glory [...]
NAUGHTY & NICE: TROOP BALANCE...
The Dev Team’s made a list and we’ve gone and checked it twice,We’ve found some Troops and Weapons who’ve been Naughty or been Nice…The Nice Troops got some buffs to help them rise and shine,But the Naughty Troops got nerfed to help bring them back in line. [...]