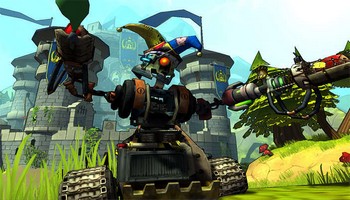 Guns and Robots is a free to play online third person shooter. The game brings robot action with massive customization. Players get cartoony bright 3D graphics in attractive environments and challenge each other in open arenas. Guns and Robots gives fun, entertaining experience with easy to master gameplay and numerous options to experiment robot constructing skills. The game features numerous battle arenas with a variety of game modes. One feature standing out is the ability to fire from multiple weapons at one.

Massive customization: In Guns and Robots, the robots come in three module classes based on players’ assembly and unlimited options for character customization.
Pinpoint enemies with multiple weapons simultaneously: Wide variety of potential combinations per weapon allow players to fine—tune their arsenal according to their game play preferences.
Enjoyable and extremely funny online arenas: where players literally blast their way through.
Adrenaline-pumping game play: Different maps add fine mixture of thrill, speed and action to the game play.
Dynamic combat experience: Players can choose to line up for high-level real-time combat.
Player Guilds: Players can join, create guilds and benefit from numerous guild features.
Achievements: Variety of achievements for the players with exceptional performance.

Capture the Batteries: this is similar to a Capture the Flag mode
Team Deathmatch: the usual deathmatch mode
Bomb Squad: in this mode you have to destroy the Enemy Base.

Guns and Robots is free-to-play and free-to-win. But has been criticized for offering too slow a progression using only the points earned in-game. Available slots for robots and inventory are limited early to a small amount and require exponential play-time to be unlocked. Mention has also been made of the incentives to spend available points (sparks) on mystery crates following each game match. 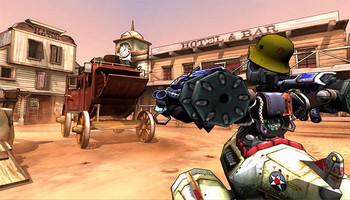 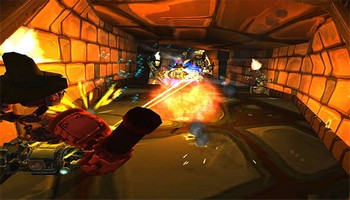 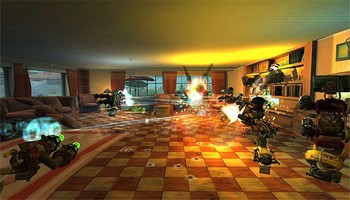