Heroes of Newerth is a free to play multiplayer online battle arena (MOBA) video game developed by S2 Games for Microsoft Windows, Mac OS X and Linux. The game idea was derived from the Warcraft III: The Frozen Throne custom map Defense of the Ancients and is S2 Games’ first MOBA title. The game was released on May 12, 2010 and re-released as a free-to-play game on July 29, 2011. On December, 13 2021 the Heroes of Newerth team announced plans to terminate the game in 2022.

Heroes of Newerth pits two teams of players against each other: the Legion and the Hellbourne. Both teams are based at opposite corners of the map in their respective bases. Bases consist of buildings, creep spawn points, towers, a hero spawning pool, and a central structure. The goal of the game is to either destroy the central structure, world tree (Legion) or Sacrificial Shrine (Hellbourne), of the opposite base or force the other team to concede. Players achieve this by selecting heroes with unique skills to combat the other team.
The different game modes are: Co-op, Player Hosted, Normal, and Casual. Co-op matches players either with other players or with bots against a team of bots. Player Hosted allows players to customize their games and then host them to a list for others to join. Casual is similar to a Normal game in terms of layout and game play. However, they differ in other ways such as an included courier for each side at the start of the game and increased gold and experience earnings throughout each match.
In Matchmaking games, Heroes of Newerth groups players by their Match Making Rating (MMR) via an algorithm. A new player has an MMR of 1500 and then each ranked game played changes that MMR, going up if the player wins and down if the player loses. 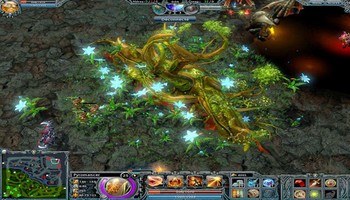 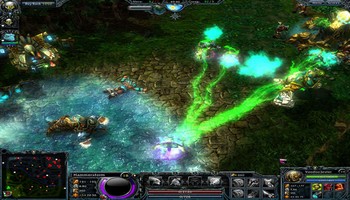 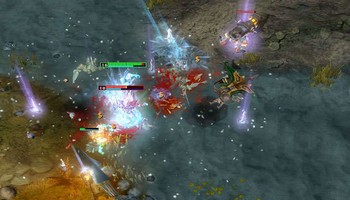