Mad World is an upcoming free-to-play 2D cross-platform MMORPG powered by HTML5 and developed by Seoul-based studio Jandisoft, with unique hand-drawn, dark fantasy-themed art presented in 2D isometric style, the story of which takes place in a post-apocalyptic world where humans struggle to survive under the rule of demons. A beta version of Mad World is expected to be released on PC this fall (2018) while they hope to fully release the game sometime in the 1st half of 2019 for most if not all mobile and desktop browsers and devices.

Cross-platform playable MMORPG: Mad World is designed with HTML 5 to provide simultaneous access to all HTML 5-compatible browsers and devices.
Classic MMORPG Elements: Mad World will feature all classic MMORPG components with extra attention given to the combat and community aspects.
Unique Hand-drawn Art style with Stylish Animation: Mad World is hand-crafted with unique hand-drawn art style and features stylish arcade-like animation.
PVP Battle Arena Modes: Players will be able to play against each other in real-time combat taking place in dedicated arenas.
Grotesque Creatures: Gorgeous H.P.Lovecraft-inspired and cartoon-styled characters and creatures.
Classless, Weapon-based Combat System: Abilities or spells depend on the weapon you carry rather than class.
Giant Boss Raids: Players will be able to unite massively to fight against giant creatures in Boss Raids.

In a post-apocalyptic world infested with dark souls, a few brave men dare to dream of escaping from the grim reality. No one remembers the past. A mysterious event leads the world into complete annihilation.
Thousand years pass. The world stands upon a new era. In this world of absolute chaos,
hope and despair lay at the crossroad. People call this world the “Mad World” 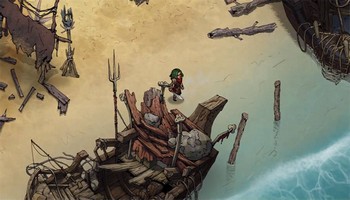 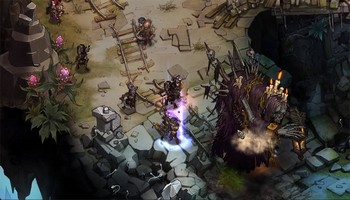