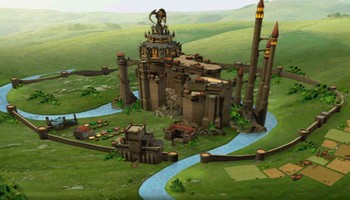 Might and Magic: Heroes Kingdoms was a real-time strategy massively multiplayer online browser based game on the Heroes of Might and Magic series. Your goal is to win the war together with your alliance by gathering the tears of Asha, Primordial Dragon-Goddess of Order in the world of Ashan, and creating your dynasty of heroes throughout the season of the game. Play as a faction, take possession of your kingdom and use your skills to vanquish others! Start conquering the world of Ashan!

Players choose a game world to play on and each is given control of a city within one of the regions. Each region is itself made up of a 25 zones (5 by 5 tiles) with the city at the centre. Four of these zones contain mines which provide resources to the city while others are open ground. Each zone in a newly acquired region is populated with an army of non-player character (NPC) troops which must be defeated before mined resources can be collected or before buildings can be constructed on the open ground.
The city houses a hero character and the player’s troops. Structures can be built within the city to enable the hiring of new heroes, the training of additional troops, the researching of spells, and to provide other bonuses. Heroes can lead troops into battle, can improve mines and construct buildings in the zones surrounding a city, and can establish new cities in other regions. They gain experience points from performing these actions and, as they level up, can learn trades and skills to boost their performance in battle or the city’s economy.
Players must organize themselves into alliances for protection and to obtain the “Tears of Asha” which are required to win the game. Each game last approximately 6 months and players can then start a new game and receive bonuses in the new game world based upon their achievements in the previous game world.
The economy of the game requires the collection of gold, common resources (ore and wood) and rare resources (mercury, crystals, sulfur and gems). Gold is used to recruit and maintain heroes and troops, and to pay for structures and buildings. Common resources are required to build basic city structures. Rare resources are required for specialist and magical structures and to recruit high level troops. Since each city has only four mines, other resource-types must be purchased or looted. Trades can be made with other players or with an NPC merchant.
Each player is one of five races, Haven, Academy, Necropolis, Inferno, and Sylvan. Each race has different skills in combat and magic and requires different rare resources for their respective specialist structures and troops. 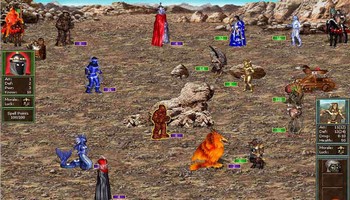 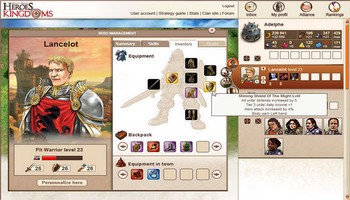 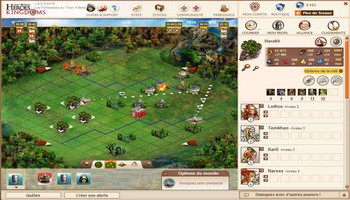