Orcs Must Die! Unchained is a free-to-play multi-player tower defense game which takes the award-winning Orcs Must Die! action tower defense gameplay to a whole new level with team-based gameplay! But don’t get cocky, because the stakes are higher, the traps are bloodier, and the invaders are even more ravenous. You’ll need to bring your A-game and a few of the biggest orc-haters you can find! Orcs Must Die! Unchained is set in the familiar world of its hilarious fantasy predecessors, years after the finale of Orcs Must Die! 2. With the discovery of dozens of new rifts and worlds beyond them, heroes have come from far and wide to wage all-out war for control of these magical gateways. In the years since Orcs Must Die! 2, the War Mage and Sorceress have done their best to rebuild the once-mighty Order. Their new enemy, the Unchained, is no longer the mindless horde defeated twice before, but instead an organized army led by its own powerful heroes.

Killin’ Orcs and Smashin’ Dorks: Orcs Must Die!’s classic white-knuckle witch’s brew of action and strategy returns, letting you team up with your friends to lay waste to millions of invading monsters! Build an impenetrable gauntlet of traps to hack, grind, flatten, gibletize and incinerate your foes, and unleash your own minions to charge into the heart of the enemy rift!

It’s Definitely a Trap: The only thing better than building traps for murdering minions is building more traps! Play to unlock traps or collect components and craft your own. Cover your fortress keeps in gleeful torture devices and engineer a variety of hilarious and violent ends for invading minions. Customize your strategy for every battle. The hordes are no match for the powers of elements and physics!

Real Action Heroes: Are you mage enough to defend the rifts? Dozens of unique and powerful heroes with deep gameplay options offer a plethora of painfully creative ways to stop orcs and opposing heroes in their grimy tracks. Old friends the War Mage and Sorceress return to fight alongside a cast of new heroes like Blackpaw, Hogarth, Stinkeye, and Bloodspike. Whether you prefer might and majesty or scum and villainy, there’s a hero for every type of orc-slayer around.

More Ways to Slay: Everyone’s favorite Endless mode has returned in Orcs Must Die! Unchained along with expanded 5-player co-op Battlegrounds. For the first time in the series, War Mages can also now team up with four friends to compete in 5v5 multiplayer rift siege warfare! 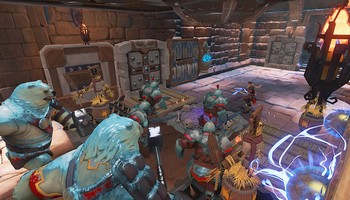 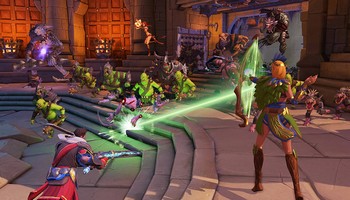 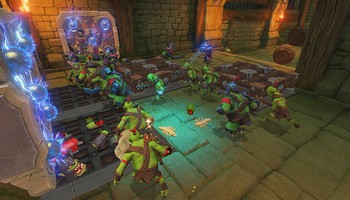