Path of Exile is a free-to-play MMO and single-player Action RPG set in the dark fantasy world of Wraeclast. It is developed by New Zealand based independent developer Grinding Gear Games and is a downloadable free-to-play game supported by “ethical microtransactions”. It is designed around a strong barter-based online item economy, deep character customisation, competitive PvP and ladder races. Players can pick from seven playable character classes, which each focus on some combination of the core attributes: Strength, Dexterity and Intelligence.

Skill Gem System: Action RPGs have always been about two things: devastating skills and valuable items. Skills in Path of Exile are items – gems that grant abilities when socketed into equipment. A wide range of support gems allow the behaviour of skills to be modified. You can augment your Fireball to chain from enemy to enemy or split into multiple flaming projectiles. Up to five support gems can affect a skill at any time. Because gems level up independently and some are hard to find, they can be very valuable in trade.
Passive Skill Tree: All of Path of Exile’s character classes share its vast passive skill tree. Starting at one of seven distinct locations dictated by their chosen class, players can focus on the core specialities of their class or travel across the tree to build complex combinations of skills from various disciplines. Scattered across the tree are Keystone passives that drastically alter the way a character is played. Resolute Technique removes your ability to get critical strikes, but also prevents enemies evading your attacks. Necromantic Aegis grants the properties of your shield to your minions rather than to you. Combining these passives with clever item and skill gem choices allows players deep levels of customisation.
The World of Wraeclast: Wraeclast is a dark, brutal continent. Scarred by mysterious catastrophes of the past and inhabited by creatures of nightmare, the very environment challenges exiles who dare explore it. We’re sick of the recent trend towards bright, cartoony RPGs. The art style we chose for Path of Exile is dark, gritty and realistic. Wraeclast is terrifying, and we’ve tried hard to do it justice.
In Path of Exile, replayability is key. All world areas including outdoors ones are instanced for your party and randomly generated, right down to the magic properties of the monsters that dwell in them and the treasure they guard.
Item System: Path of Exile is completely designed around items. Any game system that can be itemised with random properties has been. Our flasks are persistent items that have mods. Our end-game areas can be found as Map items that have mods altering their challenges and rewards. We’ve gone as far as removing gold as a currency and basing our trade economy around orbs that can randomly reroll the properties of other items. We have carefully constructed our item system for veterans of the best Action RPGs.
Leagues and Events: One of the things that’s most fun about playing a competitive online Action RPG is taking part in a leveling race on a fresh server. In Path of Exile, we wanted to capture this feeling without constantly resetting our main economy, so we’ve created a set of race leagues that are run frequently as separate game worlds with their own ladders and economies.
In addition to regular races, leagues can substantially modify the game rules. In a Cut-Throat league, you’re able to invade other players’ instances and kill them to take their items. In Turbo leagues, monsters move and attack 60% faster than normal.
Varying in duration from one hour to several months, players can enter these leagues to show off their mastery of the game and compete to win valuable prizes. 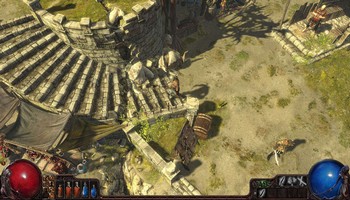 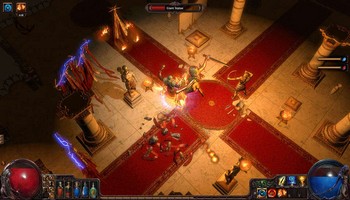 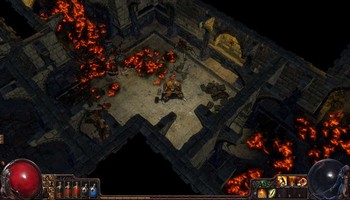 Path of Exile boasts a typical, yet enhanced Hack 'n' slash gameplay with fast-paced and skill-based combat (unlike many), virtually endless combinations to grow your character across an absurdly intricate skill tree, a fantastic crafting/currency/trading system that keeps grinding highly rewarding.

POE has created an innovative way of increasing replay value with map drop items (normal to magic) opening numerous portals to areas with various modifiers affecting the size or complexity of the level, monster packs, monster properties or even alter characters while in the level. New skills and uniques also get implemented frequently.

PoE has done very well to ensure that its soundtrack immerses players even deeper in the realm of its creepiness. Great dark-fantasy music and sound effects await you, and the voice acting is... (no spoiler).

POE is committed to creating a fair playing field for all players. You cannot gain gameplay advantage by spending real money in Path of Exile. The ingame store is highly dispensable, yet fairly well-stocked with cosmetics and collectibles for avid wearers and collectors. POE may actually be considered the most generous game in history.