Planet Explorers is a (now free) single-player, open-world survival, adventure, RPG action game by PatheaGames for PC (Windows, Linux & Mac), available DRM free on the publisher’s website or via Steam, and made open source. First released in 2016, the game became completely free to play in July 2019 due to the multiplayer code part of the game allegedly going missing and being irretrievable. This was a very unfortunate event for the developers, and the players who had bought the game, but this event also translated in the game’s single-player experience being offered for free to any new players. The game is quite huge, well made, offers many modes and features (exploration, tower defense, survival, adventure, sandbox, vehicles, etc.) and was never meant to become free, so you should definitely try it if your expectations are not too high. The game’s relatively high score is due to the game being good, vast and completely free. Negative reviews on Steam are mostly submitted by players who had bought (or backed) the game and hoped for a full release, instead of the “unfortunate” incident that led to the early termination of its development.
There are no more news for the game since the above mentioned event so we added the studio/publisher’s Twitter News Feed, just in case…

In Planet Explorers, it is the year 2287, one of the first colony ships sent out by Earth arrives at the planet Maria, in the Epsilon Indi Star System. During its landing sequence, something appears in front of the massive ship that causes it to lose control and crash into the planet. Some of the colonists survive in lifeboats, but what they find is an unforgiving land filled with creatures ready to outlast the visitors from Earth. Now the survivors must explorer, gather, build, create, fight, and ultimately, build a new home.

▶ Story Mode: Story mode is the main meat and bones of the game, it is the action-adventure-rpg-somewhat-4X segment, offering npcs, missions, colony building, farming, training, diplomacy, and of course, a storyline that you can follow or ignore. This story features a 17X8km world map with many unique character, landscapes, biomes, locations, and over 140 types of potential enemies. Even though we’ve made it seem like a very action oriented game in the trailers, in reality, players can choose to not fight so much as to just plant a farm, make some food, keep the colonists alive, negotiate with the sentient aliens, and defend the perimeter from the local life forms. That can still eventually arrive at the ending. And yes, there is an ending. Story mode also features coop with other players.
▶ Adventure Mode: This mode is based on a procedural map generated from a seed. It comes in a 40X40 kilometer map. Players will be able to complete random missions, defeat bosses, dive through dungeons, and explore different landscapes. This mode also features survival and versus.
▶ Build Mode: In this mode, there are no enemies and an infinite amount of building material. It also currently comes in a 40X40km map. Players will be able to build whatever they want in this mode, including everything in the Creations Editor. Think of this as the perfect testing ground to test everything you build. Or…it’s your place to build your garden without ever worrying about the pesky aliens. 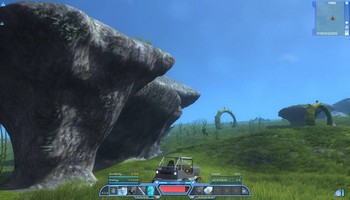 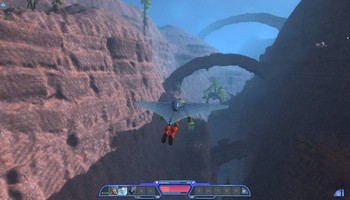