PlanetSide 2 is a free-to-play sci-fi MMOFPS published by Sony Online Entertainment for PC (Windows). Players join one of three factions (Terran Republic, New Conglomerate, or Vanu Sovereignty) and engage in combat on foot, vehicles, or the skies. Battle across open fields to urban centers with and against hundreds of other players to control key territories and valuable resources. This game produces thrilling and epic battle scenes in which you may find yourself spectating the ongoing warfare all around you, instead of actually acting towards it… The game does requires good computer specs however.

▶ Three Empires: Players will have their choice to join three different Empires: Terran Republic – A militaristic government that uses its authoritarian might to impel humanity to peaceful coexistence through any means necessary. New Conglomerate– Freedom fighters struggling against the tyranny and oppression of the corrupt Terran government and the soulless Vanu cultists. Vanu Sovereignty – A technocratic society that believes humanity can only evolve by rediscovering and tapping into the lost technology of an ancient alien race.
▶ Massive Warfare: Battles take place not between dozens of troops, but thousands; with air and ground vehicles slugging it out alongside squads of troops. Whether in open fields, tightly-packed urban centers or enormous structures, victory requires strategic teamwork and a quick trigger finger to survive the massive battles.
▶ Battle for Territories and Resources: The core gameplay of PlanetSide 2 is about holding key territories and controlling resources. Each battleground holds valuable resources and key positions, and the Empire that can conquer (and manage to hold) these territories are rewarded with tech bonuses, greater access to equipment, and more.
▶ Persistence: In PlanetSide 2 battles last for days or even weeks, and finally taking control of the base means it’s yours until someone can take it back. Working strategically as a team to capture key tactical positions such as power plants and ammo depots have long-lasting effects that can shift the tide of battle.
▶ Metagame: Large scale, persistent and coordinated effort required by hundreds of players working together to accomplish continental domination.
▶ Enormous Maps: PlanetSide 2 features incredible continent maps with dozens of square kilometers of seamless gameplay space; every inch of which is hand-crafted, contestable space. With the new territorial control meta-game, landmass has intrinsic value.
▶ Class-based Combat: Players are able to build their soldier to match their play-style, or to match the needs of their squad, outfit or Empire. With 6 distinct classes, each combat role, vehicle and weapon has extensive certification skill trees. These cert trees allow players to grow characters laterally, unlocking weapons, attachments, equipment, specialized skills, and more.
▶ Outfit Teamwork: Outfits (guilds) have access to unique customizations– allowing outfits to have their own identity, reputation and role in the ongoing war.
▶ Vehicles and Weapons: Players are able to access a huge array of weapons and vehicles which can be extensively customized for player preference or purposed with unique attachments and add-ons earned in game to fit each player’s style.
▶ Business Model: PlanetSide 2 is Free-To-Play with an additional in-game RMT marketplace with items that range from cosmetic camouflage patterns and armor paint jobs, to things like XP accelerators. Items that affect gameplay, such as weapon side-grades will be purchasable via resources earned in-game through gameplay and achievements.
▶ Voice Integration: Players are able to communicate with their squads both through keyboard and voice chat. 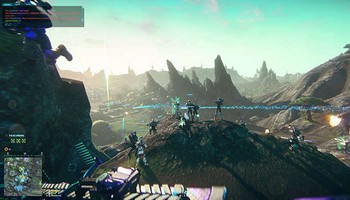 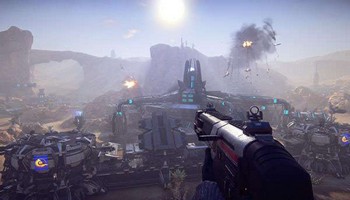 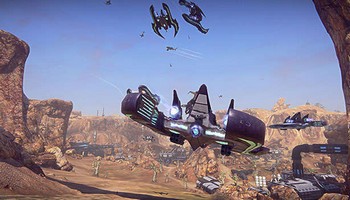 95
/100
“
As of 2017, PlanetSide 2 remains the best and most comprehensive MMOFPS experience ever created to this day. Total and non-stop sci-fi immersion into air/ground/building warfare on a massive scale. Do I even need to mention it's free?
”

Planetside 2 allows you to enjoy state-of-the-art 3D graphics on a low-end desktop PC. The Forgelight Engine also produces realistic weather and day/night cycles as well as volumetric fog and clouds to use as possible hideouts. Breathtaking show, especially by night when dozens of vehicles and aircraft from each side illuminate the ground and sky with hundreds of intermediate-range missiles fired at once.

Planetside 2 offers an immersive day/night territory control experience in a massive open-world, sparking large class-based battles involving up to 2,000 players on foot or in armed land/air vehicles. If you prefer a more tactical gameplay, you will be thrilled to bits when going solo or with a small squad on a mission to hack and taker over enemy bases that have been left unattended, away from mass confrontation.

The replay value of Planetside 2 is top-notch and maxed out by its highly rewarding and engaging, albeit grindy, level-up system, which is tied to your in-game performance. Earn valuable credits with frags and more with head shots, to be spent eagerly on a huge variety of weapons, vehicles, and truly empowering upgrades.

Planetside 2's boasts an excellent freemium business model. The grinding to get progression going in terms of armor and weapon upgrades is rather long and tedious, but this can be seen as a positive, rewarding feature. Being low-leveled in Planetside 2 means you are weak compared to both those who have purchased items and upgrades and those who have played long enough to afford it without paying. In both cases, fun is guaranteed all the way up to the top of the learning and level-up curves. Also, bear in mind that a substantial part of the game boils down to carrying out smart, tactical moves.