Slime Isekai Memories is a free-to-play 3D Japanese RPG (JRPG) by Bandai Namco for Mobile devices (Android & iOS) – and playable on PC using an emulator -, based on the popular 2018 television anime series That Time I Got Reincarnated as a Slime. The game is filled with anime / manga cut scenes and features classic JRPG combat gameplay (turn-based). The English version of the game, fully titled “That time I got reincarnated as a slime ISEKAI Memories”, is now available a month early, and may have a few bugs as a result. The game offers a new adventure that brings together favorite series characters including Rimuru, Great Sage, Gobta, Shion, Shuna, Benimaru, Gabiru, and introduces new ones.

A new story supervised by Fuse, author of the original light novels! A mysterious girl named Shinsha appears, claiming to be Rimuru’s daughter. What is her relation to Izis, the witch from the “mirror land”? Will Rimuru and the citizens of Tempest survive the challenges Izis and her followers have in store? Don’t miss the alternate universe versions of familiar characters like Gabiru, who has ascended the Lizardman throne in mirror land, or Shion, who evolved after absorbing her fallen comrades’ souls. Their stories won’t be told anywhere else!

▶ Anime cut scenes: Relive famous moments from Season 1 of the anime in fully voiced cut scenes. The star-studded vocal cast lend their talents to battle voices and interactions in town as well!

▶ Build and visit your own Tempest: Build and position all sorts of buildings and facilities: your citizens’ homes, restaurants, the blacksmith shop, the laboratory, magic-enhancing facilities, and more. Walk through the town you’ve built and interact with your citizens to get a glimpse of their daily lives!

▶ 3D command-based battle system: The controls are simple: just select the cards for your hand. But there’s deep strategic gameplay to enjoy as you learn to effectively use abilities drawn from the original work! Enjoy dazzling finishing move animations that will make you feel like you’ve stepped into the anime!

▶ Predator and Great Sage systems: The Predator system recreates Rimuru’s unique skill, Predator, from the original work and is used to strengthen characters. The Great Sage system is there to provide gameplay advice and guidance.

▶ Animated opening and theme song: The theme song is “Phantom Lights” by Takuma Terashima. Enjoy a theme song written specially to capture the TenSura world, and animation by Eight Bit, the studio producing the anime. 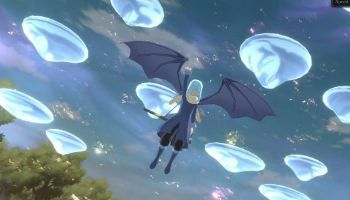 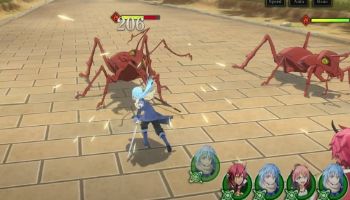 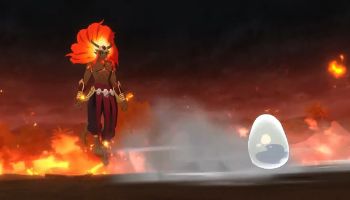