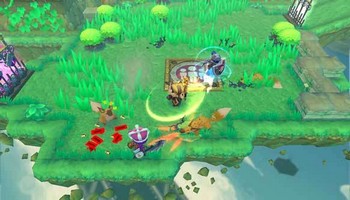 Spiral Knights is a massively multiplayer online role-playing game created by Three Rings Design and published by Sega. In the game, the player controls a knight of the Spiral Knights order, which has crash-landed on the mysterious planet Cradle. Knights collectively explore the Clockworks, the mechanized, constantly reorganizing dungeon that fills the planet’s interior. The knights equip armor and weapons to aid them in their battles against the monsters inhabiting the Clockworks. When they are not exploring, knights trade with each other and with vendors, in order to improve their equipment. Spiral Knights encourages cooperative gameplay and has hundreds of unique weapons to discover.

-Co-operative Exploration: The Clockworks offer challenges that are best tackled with friends. Fight monsters, solve puzzles and discover treasures together!
-Instant Action: Go from login to a multiplayer adventure in less than a minute.
-Ever-changing World: The Clockworks cycle levels to explore in real time. Every moment of every day changes the world.
-Create an Arsenal: There are hundreds of unique weapons and gear to discover and alchemize.
-Form Powerful Guilds: Guild alliances allow greater influence over the world. Amass powerful minerals to transform the Clockworks!
-Free to Play! Spiral Knights is free to play, no subscription is required to enjoy everything the game has to offer.

The Spiral Knights have awoken on an alien world. Their equipment stores have been raided and their starship, The Skylark, will not recover from the crash. Now they must work together to survive on a journey that will take them to the very core of the world. Cradle is a hostile planet teeming with all manner of alien creatures. Any hope of survival you may have rests on your ability to amass an arsenal of weapons and gear that will provide you with the right options for any environment. As a Spiral Knight you have total freedom to customize and use your arsenal however you choose!

Spiral Knights is a top-down, third-person, real-time action-adventure game, comparable to The Legend of Zelda: Four Swords Adventures. While thousands of knights may be participating in Spiral Knights at a time, any given knight interacts directly with only a small subset of them. When a knight is in the Clockworks, he interacts with only three (or fewer) other knights, as well as numerous monsters.
When a party of knights begins a Clockworks level, they appear together at an entry point. Their goal is to make it to the elevator, which allows them to descend to the next level or to return to Haven. The knights’ route through the level is controlled, to some extent, by a sequence of gates. There are also switches to activate, keys to retrieve, and traps to avoid.
While they proceed through the level, the knights battle monsters together in real time. A knight may wear three pieces of armor (suit, helmet, and shield) and up to two trinkets (items that grant additional protection or enhancement) at a time. Also, a knight may wield up to four weapons at a time, by choosing from among whatever swords, handguns, and bombs he possesses. There are four kinds of damage, that a knight can inflict upon a monster, depending on the weapon he uses: normal, piercing, elemental, and shadow. Each monster type is vulnerable, neutral, and resistant to certain damage types. Additionally, there are seven status effects that a knight can inflict upon a monster: freeze, shock, curse, fire, sleep, poison, and stun. Occasionally, knights find objects that temporarily bolster their defenses, that partially heal their damage, or that they can throw at monsters to inflict damage and induce status effects.
The knights collect treasure dropped by the monsters and extracted from treasure chests. They also collect minerals, which can be applied to the construction of new gates in the Arcade. Significantly, most of the items picked up by the party during its travels are shared. In this way, the rules of the game promote teamwork rather than competition among players. Knights help each other by ganging up on monsters, by healing each other, etc. However, some items are not shared, and some players prefer to play Spiral Knights solo.

On August 2, 2011, a player-versus-player feature was added, in which knights enter contests against each other, with a chance of winning prizes. The first of these contests, called Blast Network, is similar to Bomberman; players place bombs to destroy blocks and their opponents while collecting power-ups. The second contest, called Lockdown, employs gameplay similar to that of the rest of Spiral Knights. Each team of knights attempts to capture and defend control points from the opposing team. Each knight’s usual shield is replaced with one of three special abilities: speed, invisibility, or strong defense.
On February 22, 2012, a system of missions was introduced. “Missions range from simple tasks like speaking with an NPC to going on a major expedition.” Missions reward the knight with rank, prestige, and items.
There have been some changes in the game like the user interface system has been changed and some functions like bash and dash have also been added. An option to customize controls was also added. As of July 30, 2013, a pet feature was added called “Battle Sprites.” 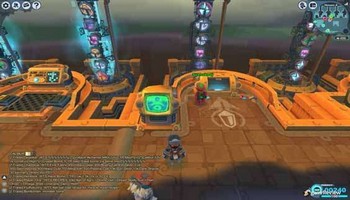 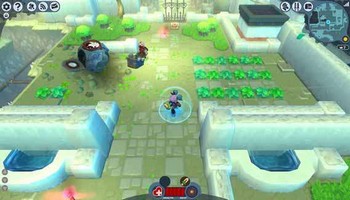 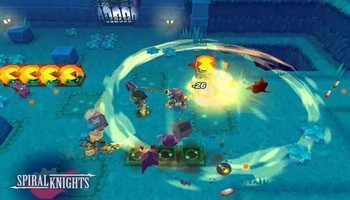