Survived By was a free-to-play MMO bullet-hell shooting game for PC, “where permadeath was just the beginning”. Every time you die, you’re survived by a new descendant who carries a small part of your legacy with them. Team up with hundreds of survivors as you shoot your way through hordes of Chimera, explore dungeons, collect loot, craft gear and of course… die. Again, and again. Who will you be survived by…? Closed Alpha began Q4 2017 and Early access on December 05, 2018 on Steam.

MMORPG With Up To 100 Player Battles: Survived By is a massively multiplayer online role-playing game played with up to 100 players. Dodge bullets, slaughter hordes of Chimera, and level up while crafting the best gear and weapons. Be careful though, once you die… it’s almost game over.
Permadeath Is Just The Beginning: Unlike traditional roguelikes, players regenerate health, survive longer, and don’t need to dodge everything to stay alive. But every time a player dies, they lose almost everything. They’re survived by a new descendant who carries a small part of their legacy with them.
Bullet Hell Ballistics: Players craft and wield increasing deadly weapons that can provide tactical options tailored to the character class they select. They’ll arm themselves with a combination of magic, steel, and special abilities to fend off enemies while artfully skirting their damaging spray.
Gorgeous Pixel-Art World: Team up with friends and others to explore a huge beautifully rendered pixel-art world. Gear up and journey together with friends to crush enemies, raid dungeons, and trade items in a vast, diverse landscape with many in-game achievements and challenges, and hundreds of hours of gameplay.
Craft Weapons to Slay the Hordes: Players craft and wield powerful projectile weapons as they confront an array of Beasts (hostile and aggressive creatures), Infernals (fiery forces of indiscriminate destruction), Furies (invasive nightmares that corrupt anything they touch), Spirits (natural disasters made manifest), and more on their journey.
Fair Free-To-Play Model: Survived By is designed as a fair free-to-play game. Every item in the game can be earned for free without paying.
Frequent Updates: Survived By is designed to be updated frequently with new content and exciting new features. The game will be built with its community’s voice and desires in mind. 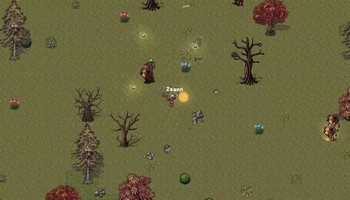 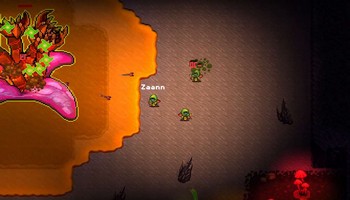 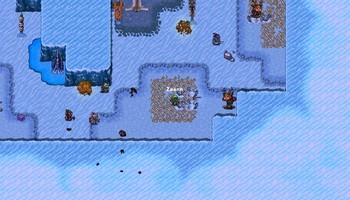