The Exiled Realm of Arborea (TERA) is a fantasy adventure and action MMORPG developed by Bluehole Studio. TERA is a true action MMORPG, providing all of the depth of an MMO with the intensity and gratification of an action game. Players fully control their characters using the game’s dynamic battle system. The world is under siege by evil gods, monsters, and beings from the underworld, and it’s up to the players to stand against their onslaught to save it.

– A New Breed of MMO: TERA takes the fight beyond whack-a-mole monotony with enhanced aiming, dodging, and tactical timing to create intense and rewarding combat. Unlike other MMOs, you can use your controller or keyboard and mouse to control the action like never before. With all the depth you expect from a traditional MMO, plus the intense gratification of action combat, TERA changes all the rules.
– True Action Combat: Experience an Action MMO beyond “point and click” where skill, position, timing, and aim determine success in combat.
– Vast Fantasy World: Play seven character races and eight classes. Battle hundreds of monsters throughout 80+ zones and embark on thousands of quests in a game world rich in history and lore.
– Epic Monster Battles: Advanced enemy AI and enormous bosses deliver a more intense and engaging combat experience.
– Stunning Graphics: Explore a world filled with breathtaking visuals powered by Unreal Engine 3.
– Choice of Control: Play with mouse and keyboard or your favorite PC-compatible console controller.
– Vibrant Online Community: In a faction-free world, all players can impact the community as well as the social, political, and economic structures of TERA.

TERA has typical MMORPG features such as questing, crafting, and player versus player action. The game’s combat uses a real-time battle system that incorporates third person camera view. The player targets an enemy with a cross-hair cursor rather than clicking or tabbing an individual opponent (which is called the “Non-Target battle system” by the developer). The Players need to actively dodge enemy attacks.[6] A keyboard and mouse or a control pad can be used to control the character.

About a millennia ago two omnipotent titans Arun and Shara entered into formless voids and for reasons we can only guess, fell asleep.
The titans started to dream. Dream of a world that took form on their backs known as Tera.
The first beings to call Tera home were twelve godlike beings dreamt up by the titans, but it wasn’t long before the gods started fighting.
As the dream continued new creatures took place called mortals, they were less powerful but far more numerous.
Arun dreamed of ambitious Elves, clever Humans, honor bound Amani, powerful Giants, scheming Devas, and mischievous Poporis.
Shara dreamed of sly Sikandari, dark Gulas and Vampires, fierce Wendigos, strange Faeries, and serpentine Nagas.
The mortals were forced into the divine wars of the gods, which eventually left the gods dead, imprisoned, or otherwise diminished.
The mortal races didn’t escape unscathed. Some—like the Sikandari, and most of the Giants—were wiped out but others rose from the wars such as the Barakas and Castanics.
Now that the gods were gone the seven races; Amani, Barakas, Castanics, Elin, High Elves, Humans, and Poporis must band together to fend off a new enemy.
A metallic race from the underworld called Argons; their goal is to take over Tera and wake the titans to end their dreams and destroy Tera. 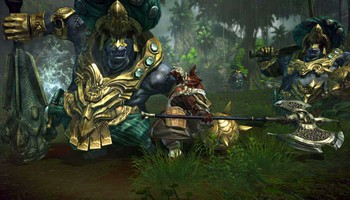 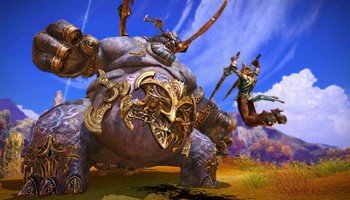 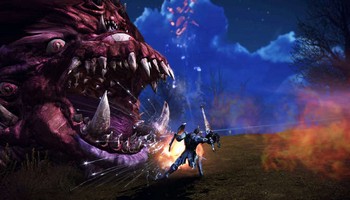