Warframe is a cooperative free-to-play third person online beat ’em up and shooter game set in an evolving sci-fi world. Join your friends or try on your own in player-vs-enemy raids across the solar system and master the power of the Warframes. The game may be played exclusively as a shooter or a melee game depending on your play style. Stand alone or fight together against enemies that threaten your world. They were called Tenno. Warriors of blade and gun: masters of the Warframe armor. Those that survived the old war were left drifting among the ruins. Now they are needed once more. The Grineer, with their vast armies, are spreading throughout the solar system. A call echoes across the stars summoning the Tenno to an ancient place. They summon you. Allow the Lotus to guide you. She has rescued you from your cryostasis chamber and given you a chance to survive. The Grineer will find you; you must be prepared. The Lotus will teach you the ways of the Warframes and the secrets to unlocking their powers.

In Warframe, up to 4 players work together to complete missions, such as eliminating enemies or retrieving data from terminals, using guns or/and melee weapons. Players wear a battlesuit called a Warframe, each with its own set of abilites and statistics; and are equipped with 3 weapons—a primary weapon (such as a rifle or shotgun), a secondary weapon (usually a pistol), and a melee weapon (like a longsword). Players earn Affinity (experience points) for killing enemies and completing challenges and missions, which allows them to level up their weapons and armor. Warframes and weaponry have access to modifications, or “mods”, that can be installed, removed and upgraded between missions; the higher the Affinity rank of any one piece of equipment, the more mods it can accommodate.
The camera is positioned over the shoulder for third-person shooting. The player can jump, sprint, slide, and roll, as well as combine techniques to quickly move throughout the level and avoid enemy fire. The game also allows players to utilize parkour techniques to evade enemies, bypass obstacles or gain access to secret areas. Maps are generated procedurally; with prebuilt rooms connected together so that no levels have the same layout. At times, the enemy faction can initiate a lockdown of the area, forcing players to hack security terminals by completing a puzzle minigame within a small time limit.
Credits, ammo, resources, and mods can be found in set locations, such as lockers and destructible containers, as well as dropped by enemies. New weapons, Warframes, and equipment can be purchased in the market (either the items themselves or their blueprints), using either Credits earned in-game, or Platinum purchased via microtransaction. Blueprints can be constructed using resources found during gameplay. 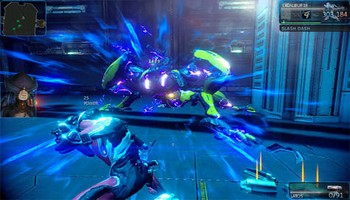 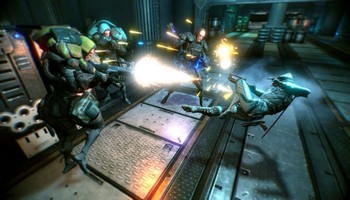