Wind of Luck is a massive multiplayer online game, in which the action takes place in the golden age of piracy in XVI-XVIII centuries, when the open sea piracy flourished, rum was neat, and the adventurer’s life – a short one. The game conveys the atmosphere of piracy created by adventure literature XIX-XX centuries and place player in the world of romanticized piracy, with unlimited opportunities in high tides of fortune. The player begins his career as captain of a pirate boat with a few guns and a small crew in a huge world with 180 unique towns in three vast regions, covering the most lively areas of navigation at that time – the Caribbean Sea and Gulf of Mexico, Mediterranean Sea, Indonesia, East China and South China Sea.

Realistic Atmosphere : The game recreates the atmosphere of anarchy, familiar to us from the myth of the golden age of piracy, when every captain was a man for himself, pirates power barons held on personal authority, the trade was an armed and well-being of every adventurer depended on his ability to cope with the ship and crew.
Golden age of Piracy : The Sunken ships, lost islands, treasures, “black labels”, privateering, caravans, bounty hunters, pirates, corrupt and honest governors, smugglers, powerful trading companies, kidnapping and ransom – all essential elements of piracy’s “golden age” will accompany the player and influence the world around him.
Pirate Factions : The player can join to one of three large pirate factions – each of them spread his power over the entire region. The big three pirate faction hate each other and take every possible actions to soften his enemies. And yes, this means full PvP against other factions!
Sea Battle : The focal point of the Wind of Luck gameplay is a sea battle – highly maneuverable, giving the player a wide variety of different tricks and unusual actions. Each ship has its own strengths and weaknesses, and even the light brig have the opportunity to emerge victorious in the battle with the first class line ship. A special model of the ships movement let player feel the mass of the sailing vessel and, at the same time, it allows maintaining the necessary flexibility for the gameplay and the dynamics of hard fighting.
Variety of Ships and Weaponry : The player can capture, buy, order, build or steal ships of 90 various types and equip his ship by dozens of species of long cannons, carronades, Gatling guns, harpoon cannons, even catapults.
The economy of the game : is built as an adaptive system and the market price is largely dependent on the behavior of players, which adds a sense of realism in the world. Also there is a flexible model for interaction between players and various factions, controlled by artificial intelligence (governments and commercial companies). Such adaptive behavior allows the player to feel that his actions significantly affect the environment in the world. 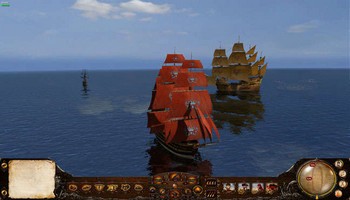 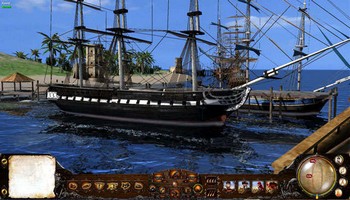 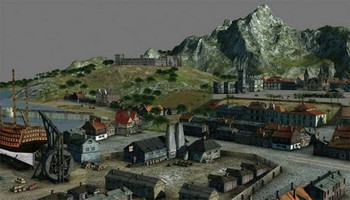