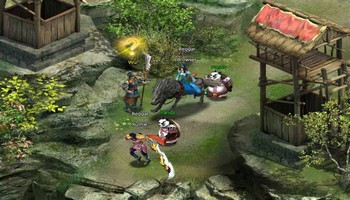 Yitien is a 2.5D Oriental fantasy MMORPG published by R2Games.com. In Yitien, players travel the world of Yuan Dynasty, China on a quest to master the secrets contained on two ancient kung-fu scrolls. The beauty of Yitien is its versatility. From traditional, turn-based RPG battles to a multi-player arena to a familiar game called Rock, Paper, Scissors, Yitien has it all. Yitien is set in late Yuan Dynasty China and revolves around the legend of the Heaven Sword and Dragon Sabre. These two weapons were forged from two pieces of the mythical Heavy Iron Sword. Each sword contains a scroll inside which holds the key to mastering an ancient, deadly Kung Fu technique.
The names of both weapons are significant. In China, the emperor is called “the Son of Heaven”. The “dragon” in Dragon Sabre refers to an emperor who has gotten out of control, a tyrant. The Heaven Sword’s full name actually translates into Heaven Reliant Sword, which means one who serves heaven, i.e. the emperor. The one who obtains the Dragon Sabre can use it to slay the despot and bring a new ruler to power. However, if the new emperor is also a tyrant, the hero can then take control of the Heaven Sword and depose that emperor as well, taking the throne for him/herself.

-Grove of Valor: The Grove of Valor is a unique PK event held at 8:15 PM every Tuesday, Thursday and Saturday. It is divided into three divisions based on character level: Beginner (lvl. 30-49), Intermediate (lvl. 50-69) and Advanced (lvl. 70+). Only the 500 strongest players from each level division can fight in the Grove of Valor.
Upon entering, players will begin fighting one another. Winning a battle earns 2 points and losing earns 1 point. Each player has 20 lives. When a player has no lives left, (s)he will be automatically transported from the event. The event will last until only one player is left standing. That player will receive 20 points and a Hero Medal (Epic). When the event ends, the player with the most points will be declared the winner and will receive EXP, items and a special title commemorating his/her victory.
In the Grove of Valor, players may not form parties and/or use items to restore HP and/or Chi. If a player does not begin battle within 50 seconds of the start time (s)he will automatically lose 1 life. Players will revive 10 seconds after dying and HP and Chi will be completely restored. In the interests of competitive balance, all participants will receive the Kung Fu God’s Blessing: base HP, Attack and Defense increased by (times player died x 40)%. In addition, every 5 minutes, random items will refresh, all players gain 1 life and completely restore HP and Chi, and all players’ Base Attack and Base Defense are increased by 40%.
– Kunlun Mts.: The Kunlun Mts. is a rather unique event as far as MMORPGS go. Every day at 7:30 PM, players can enter the Kunlun Mts. by talking to an NPC in the main city. Upon entering, all players will be dressed as Yetis and their names will display as “Yeti”. There will also be real Yetis roaming the mountains as well. Mounts, chat channels, pets, clothing, titles and character info will be hidden to ensure that it is impossible to distinguish Yetis from players.
There are 4 kinds of (real) Yetis in the Kunlun Mts.: Enraged Yeti (epic), Fierce Yeti (rare), Strong Yeti (uncommon) and Yeti (common).The different kinds of Yetis are of the same strength, but have different drop rates. Click on a “Yeti” to enter battle. Defeating a real Yeti will earn 1 point and give you a chance to obtain treasures, defeating a player will earn 3 points. But killing players will not win you any treasures, so be smart and do not kill players unless you have to!
In the Kunlun Mts, you’re on your own. You cannot die, but if you lose twice in battle you will be kicked out of the event. All participants can visit Cheung to gain EXP after the event is over based on their point totals.
– Donating Spirit: Every day players can spend Hero Medals in order to donate Spirit to their server and receive EXP in return. The higher the quality of Hero Medals used, the more Spirit will be donated and the more EXP the player will earn. When a server’s total Spirit reaches 500 (or some multiple of 500), powerful monsters called “Lore Guardians” will be unleashed on each of the game’s main cities. Players may then battle the Lore Guardians to earn valuable, rare items and lots of EXP.
– Checkpoint: The objective of Checkpoint is fairly simple, reach the checkpoint. Players roll the dice and move their player the corresponding amount of spaces on the board. If two players land on the same space, they will battle one another. While moving around the board, players may also encounter mysterious warriors that challenge them to games of Rock, Paper, Scissors, defeat them to earn rare Essence Orbs.

The Yuan Dynasty is faltering. Their mismanagement of the Chinese economy and governmental structure has left the kingdom divided. People are starving and hopeless. Bands of warriors, including the Heavenly Eagle Cult, the Ming Cult, the Emei Sect and the Wu Dang Sect are fighting amongst one another for power. Legend says that a hero, the so-called, “Fated One” will appear, unite the different sects, gain control of the legendary Heaven Sword and Dragon Sabre and overthrow the ruling Mongol emperor, restoring Han Chinese rule.
The ruling Yuan government, in addition to being incompetent, is also paranoid. The emperor and his advisors live in fear of the Fated One, placing traps to catch any who may try to challenge their rule.
“The precious sabre slays the dragon. It commands the world, who dares to disobey? If the Heaven Reliant does not appear, who can challenge it?” So says the legend. Will the Fated One appear and restore justice and peace to China, or will a once proud nation crumble? Only you can decide. 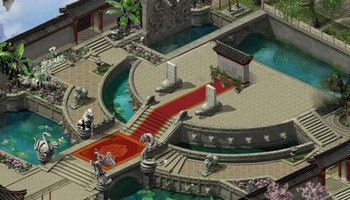 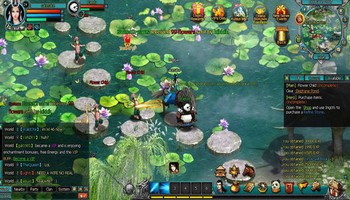 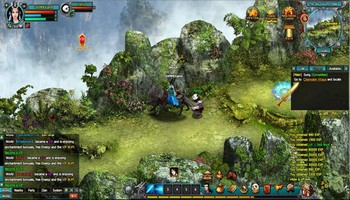