GunFleet was a free-to-play massively multiplayer online naval action shooter game, inspired by the different countries’ mosquito fleets of the First and Second World Wars, between the fleets of fast attack sea crafts and mini submarines. You could take part in […] 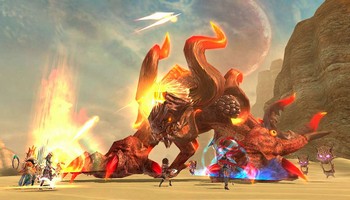 Weapons of Mythology ~ New Age ~ is a free-to-play fantasy MMORPG built with Unity 3D engine and displayed with isometric projection. In this game, you will fight the dark side using over hundreds of powerful relics and with help from […]

Gods and Idols is a 4X persistent online multiplayer real-time strategy game based around intergalactic gods in their struggle for domination over the universe. Experience life as one of the descendants of the mysterious and mighty Oberon, father of all gods, […]

Gigantic was a Free-to-play team action game or MOBA game, where heroes battle alongside a massive guardian in a fight for supremacy. Choose a heavy-metal juggernaut, a stealthy acrobat, a fire-breathing sorcerer—or something else that matches your play style. Pick attack, […]

Let it Die is a free-to-play, hyper-violent hack-and-slash action experience with roguelike elements. Fight your way to the top in this free-to-play collaborative creation brought to you by Grasshopper Manufacture and GungHo Online Entertainment America. Players fight through a perfidious tower […]